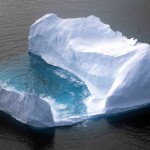 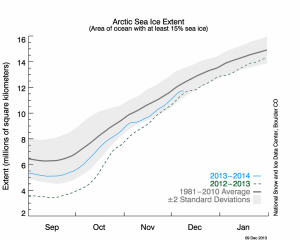 The Artic ice has strongly recovered from their all-time-low in 2012, with current levels being about 2 million square km larger than last years’ low. Combining this with the additional ice on the antartic leaves a similar ice level as seen during 1981 and 2010 on average.

The Antartic ice has seen record years in both 2012 and 2013. It clearly shows that the climate is changing, but for now the doom stories of ice-free oceans seem a bit off, although the US navy is predicting an ice-free artic by 2016 according to the Guardian.

Question remains what will happen in future years, will we see new record lows and an ice free Artic or will things return to normal? Maybe a better question is if we want to risk creating a world where the Artic is ice-free. We think not, and believe the sun should shine on solar panels rather than risk melting the Artic.