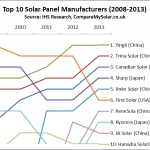 According to IHS the top 15 manufactures collectively accounted for nearly 60% of all solar panels produced in 2013. The PV module supplier base further consolidated in 2013 and we are expecting even less and larger suppliers for 2014.

From the top 10 suppliers, 7 are from China, 2 from Japan, and 1 from the USA. The USA solar panel manufacturer is a specialist in thin film (First Solar). The Japanese suppliers (Sharp and Kyocera) are both part of a larger electronics conglomerate, and can be grouped with other companies like Hyundai, Samsung, Sanyo and LG. These companies are often a safe choice given their large parent organization.

The Chinese firms are clearly focused on their large production capacity to provide value for money solar panels.  It clearly shows that between 2008 and 2013 large Chinese firms (Yingli, Trina, Canadian and Jinko) have gained positions in the top 10 ranks, with USA and Japanese firms losing positions. The following picture gives an overview of how the ranks changed between 2008 and 2012: 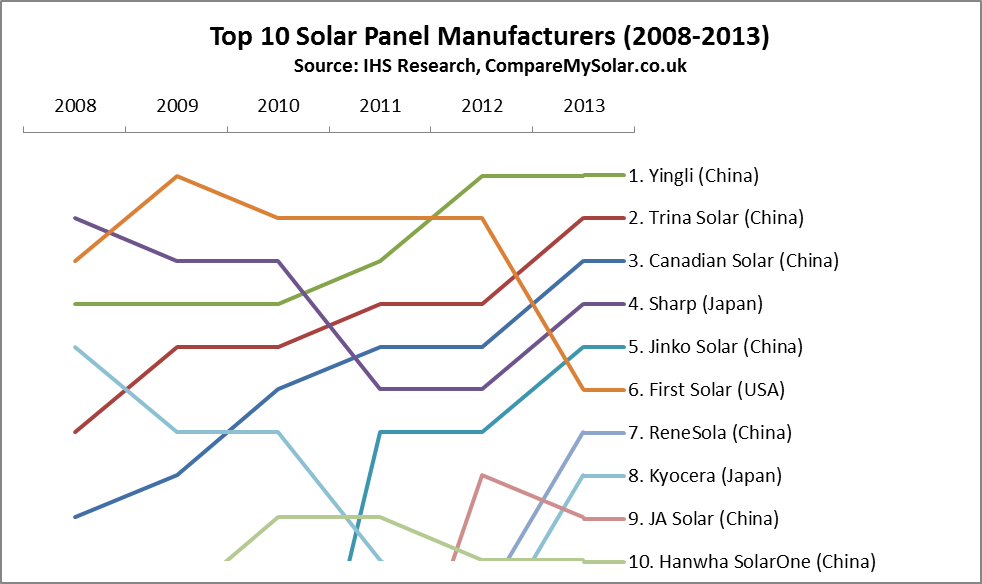 Conclusions about the changing ranks are mostly made based on the companies that are not present or declining. The high efficiency manufacturers (Panasonic and Sunpower) that have had a top 10 place for the last few years are no longer present. Combined with the decline of First Solar (from 2 to 6) shows that neither high efficiency nor thin film panels seem to achieve scale in the current market, and solar panels are becoming more and more a homogeneous commodity made by large Chinese companies.

However, in recent years China has allowed bankruptcies in solar panels, and the Suntech case (from number 1 in 2010 and 2011 towards number 3 in 2012 towards bankrupt now) shows that even the largest Chinese manufacturers can no longer survive unless they make a profit. And with many Chines suppliers still writing losses, it makes it all the more important (and difficult) to select a reliable solar panel manufacturer. In the meantime you can already check which local installers use these top 10 panel brands by entering your postcode on www.CompareMySolar.co.uk