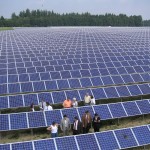 The Department of Energy and Climate Change (DECC) has today reduced the subsidy for large-scale solar. Despite saying only two days ago ““In order to provide investor certainty levies for renewable projects will not change, such as the renewables obligation (RO), contracts for difference (CfDs) and feed in tariffs (FiTs).” they announced today that large scale solar support will be reduced.

The new strike strike prices under the contracts for difference (CfD) scheme from 2015 will be as follows (2012 prices):

We are glad that support for large scale solar is still present, and believe that fields of solar panels will soon compete directly against coal power stations.