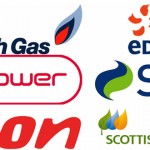 The price of electricity in the UK in 2013 averages 17.2 pence per kWh according to updated analysis of CompareMySolar, following last years article. After looking again at the standard tariff rates for low, medium and high users of the big six energy companies in the UK the average price is 16.6 pence for direct debit payment (up 10% from 15.1 pence) and 17.8 pence for standard credit payment (up 9% from 16.3 pence). Over the last four years electricity prices of the big six energy companies have increased by 29 – 37%

Based on data from Consumer Focus we looked at the average price per kWp based on the standard rate in the London Region and adjusted them for all known price increases of 2013. The following graph gives average rates for Low (2100 kWh per year), Medium (3300 kWh) and High (5100 kWh) electricity users that either pay by direct debit (cheaper) or standard credit (more expensive): 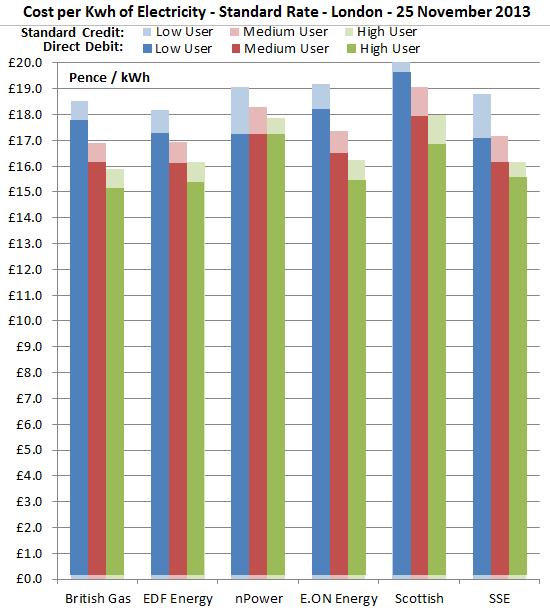 This gives us the following average price per kWh per energy company:

Over the last four years these electricity prices have been increasing by about one third. The following graph shows the average price increase over the last four winters (2010, 2011, 2012 and 2013) and is based on data from Consumer Focus and our own analysis:

So the total electricity price increase for the big six companies over the last four years are as follows:

With prices rising at this rate, electricity is quickly becoming unaffordable for everybody, which is shown by the strong decrease in domestic usage of electricity over the last years. At the same time generating your own electricity becomes more attractive every year.

Solar panels already can provide a yearly return of over 900 pounds and a payback time that could be less than 6 years. The rise in electricity prices continues to make solar panels more attractive, especially since they have decreased by more than two thirds in price in the last years. Swap to solar panels with CompareMySolar and become immune to future electricity price rises.